[Sheek Louch]
Yo, let's, talk about it what; Sheek can throw
the fiend on a nigga guarantee he won't walk up out it
No no, nickel-plated uhh; kinda old
but the muzzle them usin make this motherfucker updated
Puh-puh, nigga please; if a nigga had your son
and had him lookin down you wouldn't even squeeze
Uh uhh, I don't know; I don't wanna hear about
the money that you had, or what you did a long time ago
Yo yo the hood is mine; I don't gotta sell a lot
I just live off more points than the porcupines
Uh uhh, feel me cousin? Sheek been a problem
before this D-Block shit started buzzin
Some are sayin - no he wasn't, he turned sick
With that women in your family can suck my dick
And I've been red hot every since; I ain't sayin I'm the best
Muh'fucker, I'm just workin with some sense

[Sheek Louch]
Y'all niggaz so sweet, Sheek so street
From the doo rag on my head to the sneakers on my feet
The heart in my chest, black on my flesh
And I swear to my son, I'll leave this shit a mess
I do it for the yard, where most of my squad
is sittin in a cell, goin through hell
And every frontin nigga got a story to tell
Bye bye nigga, doves fly nigga
The hardest nigga spittin came from Bed-Stuy nigga
After that was Sheek, some say it was Jigga
I got loyalty; I ain't a king to none of this shit
But I swear, on the streets I'm royalty
Kinda scary ain't it? You don't wanna be
That's why the hood treat you colder than the A&P
I throw my fists up - but it ain't for black power
It's for any motherfucker that gets up

[Sheek Louch]
Niggaz don't wanna buh-bug bang with me
Cause 9 out 10 when you see me I got the muh'fuckin thangs with me
Fuck it put 'em up; muh'fucker put your guns in the air
If you with me nigga hold 'em up
Ruh ruh rowdy ain't it; I ain't afraid to go to war
and have a nigga white tee, like you fingerpaint it
Every hood got 'em, kinda hard to spot 'em
Once I'm there about to tell you what nigga shot him
What the fuck is up? I ain't nuttin up
Niggaz hard 'til they leakin through they button up
Get at my crew, whatever nigga who
You don't need a flight to be all JetBlue
Understand me nigga - if it happens, it happens
But I ain't really a Grammy nigga
Sheek spit rage; y'all don't want me to win nuttin
I'm bringin the whole Block on the stage 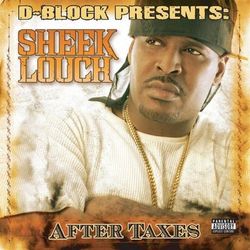