[Verse 1: Kendrick]
Now everybody serenade the new faith of Kendrick Lamar
This is king Kendrick Lamar
King Kendrick and I meant it, my point intended is raw
Fix your lenses forensics would've told you Kendrick had killed it
Pretend it's a massacre and the masses upon us
And I mastered being the master at dodging your honor
And the chapter that read at 25 I would live dormant at 5 in the morning
They raid your spot while Kendrick's performing
And if they take everything, know I got

[Hook]
Compton, Compton, ain't no city quite like mine

[Verse 2: Dre]
Still I'm at it, peel the plastic off it, you can feel the magic
Still I'm laughing at the critics talking, I can see 'em gagging
When I'm back in the back of my city, back in the 'bach
With a batch of them bangin' Dre Beats with me, look where I'm at
It's the murder cap' and I'm captain at birthin' this gangsta rap
It's a wrap when I'm done and I come a long way from a hundred dollars a month
To a hundred mil' in a day, bitch I'm from

[Verse 3: Kendrick]
So come and visit the tire screeching, ambulance, policeman
Won't you spend a weekend on Rosecrans nigga
Khaki creasing, crime increasing on Rosecrans nigga
Kendrick Conan nigga
Where you sword at, hand on the cross and swore that
I do it big as Rasputia for them shooters
Kama Sutra scream fuck your position and make you hold that
I'm trying to stay grounded like four flats
But I know flats and Piru Crip tats

[Verse 4: Dre + Kendrick]
And that's a given
I pass the blunt then pass the torch of course that's my decision
I crash the Porsche then you report that you see me in Benzes
I must report that we import the narcotics you bought it
(Then talked about it when crack hit the speakers, the music business
I blow up every time we throw up a record
Depending on what you expecting, I'm sure it's bigger than your religion
Perfected by niggas that manifested music to live in)

[Verse 5: Dre]
So tell that gangster throw his set high
Roll it up in a blunt, I'mma take you on the next high
I did exactly what I wanted that's what made them checks fly
In my direction, you never questioned when I said I
Would be a mogul before I visit 2Pac and Left-eye
Eazy and Aaliyah when I see you we gon' test drive
A Lambo in heaven but for now I'm on the redeye
Flying back to my city cuz I'll forever standby

[Verse 6: Kendrick]
Now we can all celebrate
We can all harvest the rap artists of NWA
America target our rap market, it's controversy and hate
Harsh realities we in made our music translate
To the coke dealers, the hood rich, and the broke niggas that play
With them gorillas that know killers that know where you stay
Roll that kush, crack that case, ten bottles of rozay
This was brought to you by Dre
Now every motherfucker in here say:
"Look who's responsible for taking Compton international
I make 'em holla" 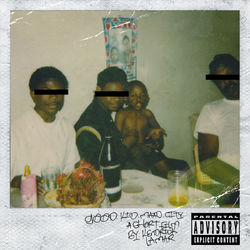