This is the greatest and best song in the world...
Tribute.

Long time ago me and my brother Kyle here,
we was hitchhikin' down a long and lonesome road.
All of a sudden, there shined a shiny demon... in the middle... of the road.
And he said:

"Play the best song in the world, or I'll eat your soul." (soul)

Well me and Kyle, we looked at each other,
and we each said... "Okay."

Look into my eyes and it's easy to see
One and one make two, two and one make three,
It was destiny.
Once every hundred-thousand years or so,
When the sun doth shine and the moon doth glow
And the grass doth grow...

Needless to say, the beast was stunned.
Whip-crack went his Whoopy tail,
And the beast was done.
He asked us: "(snort) Be you angels?"
And we said, "Nay. We are but men."
Rock!
Ahhh, ahhh, ahhh-ah-ah,
Ohhh, whoah, ah-whoah-oh!

This is just a tribute! You gotta believe me!
And I wish you were there! Just a matter of opinion.
Ah, fuck! Good God, gotta help me now.
I'm so surprised to find you can't stop me now.
I'm on fire oh hallelujah I'm found!
Rich motherfucker could fuck a duck!
Oooh! Ooh!
All right! 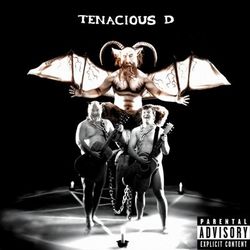