Games (The Kids Get Hard Mix)

New Kids On The Block

Somebody said somebody worked too hard, somebody gotta charm
some hearts.
Somebody said everybody's gonna wait and see, what's gonna be is
gonna be.
Think of .....

Games, oh, ee, oh, oh, oh, games, games, games, games, games.
(RAP:) Yeah, people keep on fronting on the Beantown posse,
but it's time to step up to the stand,
'cause we ain't going out like that.
Back, huh, stronger than ever, did you think we'd sever?
Never, we're too clever to be taken down clown
by your ignorant state of mind, I ain't blind but
every time I look I find you dissin' a mission that
strictly be righteous, we gotta fight this so now I think I
might just
take a stand, man, like never before, and I'm sure
that we'll endure so now it's time to even the score
I hear you knocking me but you ain't shocking me
'cause jealousy is telling me that you're just jocking me
so keep on talking skee, with pride I'm walking see,
because on anybody's block is where I'm gonna be rockin' gee.
Don't play those games, oh, ee, oh, oh, oh, stop playing those
games. 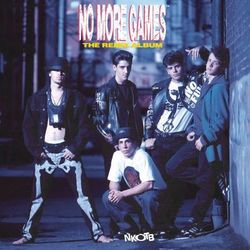