You know I still don't feel nothin', on my dead brothers
Dry snitched to his PO, when he's touched, guess you was scared of me
Qualified to lead us on this ride 'cause I'll kill somethin'
Homicide runnin' through my mind, that's my pill bussin'
Trauma I experienced back then, I ain't healed from it, still thuggin'
Even though they watchin', I don't see 'em comin', afraid of nothin'
Budded out my body in the field huntin'
On the 'Gram bluffin', know what's up, soon as I see him, up it
Bullets always burn, niggas learn when that steel touch 'em (nigga, learn)
Now if they won't hear anything from him, got to dig up him (dig him up)

Appreciate the bail money
Know I paid him back soon as I touched, just 'cause it felt funny
Get off your ass and sell somethin'
Promise not to tell nothin', Motorola cell bussin'
Lock on anything that pose a threat, it ain't no tail tuckin'
Crop out anything that ain't from the set unless he know somethin'
Take him to the 'spital, 'fore he bleed out, ain't no help, dummy
B.B. Simons belt bussin', fleekin' with the 'Miri drip
Floaters on the Delt' runnin', peekin' through these mirror tints
They love the way I move, to be this bool you need experience
Act like they gon' squeeze it when they beat me, shit get berious
Fifty for appearances, quarter on the back end
Don't call me 'bout no chain that niggas took if you ain't tapped in, tap in

Hmm, yeah, the facts is
I was still gettin' active while I'm rappin' (I was still gettin' active)
Tragic niggas lackin'
And they families peep they casket (and they families pick they coffin)
Bodies still be happenin'
If you want smoke, I'm tryna match it (I'm tryna match, nigga)
Big niggas get hit with a switch, turn it into ashes (brrt)
Like, how he go from laughin' to wheezin' and gaspin?
Traffic, and the traffic turn shooters into trappers (I turned shooters into trappers)
Fit have you sick, tryna cook a brick maskless? (Tryna cook a brick mask-less)

Went down for a thing, bailed out, and it went down again
I'm in love with glickys, play with hecklers every now and then
Resume impeccable, really put them hours in
On Deezy, it get greasy, when it's up, I'm tryin' cheese 'em
Reconstructed facials on the pavement how we leave 'em
Niggas claimin' bodies they ain't bodied, this shit tweaky
Suckers hit my bread and I went bonkers for my niecey
Since she can't get her daddy back, couple of 'em got whacked for that 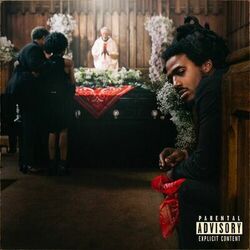