[Eminem]
You're 'bout to witness hip hop in its most purest
most rawest form flow, almost flawless
most hardest, most honest, known artist
Chip off the old block but old Doc' is back
Looks like Batman brought his own Robin
Oh God, Saddam's got his own Laden
wit' his on private plane, his own pilot
Set to blow college dorm room doors off the hinges
Oranges, peach, pears, plums syringes {*Vrrm vrrm*}
Yeah here I come
I'm inches away from you, dear fear none
Hip hop is in a state of 911 so...

CHORUS 2x
Let's get down to business
I don't got no time to play around what is this
Must be a circus in town, let's shut the shit down on theseclowns
Can I get a witness?
[Dr. Dre] Hell yeah!

[Eminem]
Quick gotta move fast, gotta perform miracles
Gee willikers, Dre, holy bat syllables
Look at all the bullshit that goes on in Gotham when I'm gone
Time to get rid of these rap criminals
So skip to your lou while I do what I do best
You ain't even impressed no more, you're used to it
Flows too wet, nobody close to it
nobody says it but still everybody knows the shit
the most hated on out of all those who say they get hated on ineighty songs and exaggerate it all, so much
they make it all up, there's no such thing
like a female with good looks, who cooks and cleans
It just means so much more to so much more
People when you're rappin' and you know what for, the show mustgo on
So I'd like to welcome y'all to Marshall and Andre's carnival,come on! Now...

[Eminem]
It's just like old times, the dynamic duo
Two old friends, why panic?
You already know who's fully capable, the two capped heroes
Dial straight down the center 8-0-0
You can even call collect, the most feared duet
Since me and Elton, played career Russian Roulette
And never even see me blink or get to bustin' a sweat
People stepping over people just to rush to the set
Just to get to see an MC who breathes so freely,
ease over these beats and be so breezy
Jesus how can shit be so easy?
How can one Chandra be so Levy?
Turn on these beats MC's don't see me
Believe me, BET and MTV
are gonna grieve when we leave, dawg fo' sheezy
Can't leave rap alone the game needs me
Till we grow beards, get weird, and disappear into themountains
Nothing but clowns down here
But we, ain't fucking around 'round here
Yo Dre!
[Dr. Dre] What up?
[Eminem] Can I get a hell?
[Dr. Dre] Hell yeah! 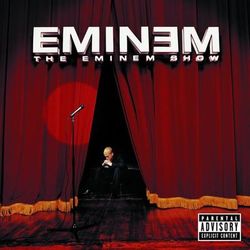